In recent years, there has been increasing global awareness of “water risks” such as water shortages and localized heavy rain as a factor that can greatly affect business due to increasing population and global warming, etc.
In order to prepare for risks such as supply chain disruptions due to flooding damage, we provide all suppliers with the Meiden Group Supply Chain CSR Promotion Guidebook and the Green Procurement Guidelines, and promote water resource conservation and Business Continuity Plan (BCP).

The Meiden Group conducts evaluation of water risk for initiatives to conserve water and comply with effluent standards. Using the free water risk evaluation tool, Water Risk Filter, provided by the World Wide Fund for Nature, we conducted evaluations for 13 production sites in 8 countries, and although many sites were assessed low risk, some sites in India and China were considered to be located in comparatively high-risk areas, and we found that risks relating to securing volume and quality of water were particularly high.
These sites do not use large quantities of water for production so there is no great concern at this time; however, based on the results of the evaluation, the Meiden Group takes the optimal countermeasures for each site based on the water risk assessment results. 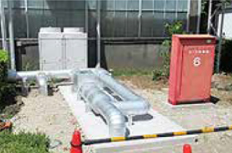 We are concerned about the possibility of water leaks from buried water supply pipes on factory grounds as our facilities age. We are systematically updating pipes and placing more pipes above ground for easy maintenance and inspections.

* Water usage volume includes tap water, water for industrial use, and ground water.
* Measurement points were changed in fiscal 2019 in order to increase accuracy, there is no continuity with those before fiscal 2018.

We ensure legal compliance by establishing and applying voluntary standards at each site and affiliate that are stricter than legal restrictions.

* Only total values are available for FY2015.

In addition to design, construction, and execution of water treatment plants, the Meiden Group provides total support through to operation and maintenance as a general water treatment manufacturer, based on our record of involvement with construction and development of water and sewerage systems in Japan. We are contributing to the solution of a range of issues relating to the conservation of water resources through or water infrastructure systems business, which is one of our core businesses.

Click here for details of products and services relating to water treatment.

Meidensha reached an agreement with Tepco Town Planning Co., Ltd. to conduct a demonstration experiment of flooding and inundation countermeasure support service in Tsukubamirai City, Ibaraki Prefecture. Through this demonstration experiment, we verify the effectiveness of disaster prevention measures by collecting flooding data and distributing information based on it.
In recent years, localized torrential heavy rainfall in a short period of time and accompanying urban inundation have been increasing due to climate change. The annual average number of localized downpours was 226 from 1976 when records began through to 1985; however, from 2010 to 2019 the average was 327, which is about a 1.4-fold increase*1. Against such a background, it is required in terms of disaster prevention to take measures against flooding and inundation.
In this demonstration experiment, IoT technology visualizes information that has been difficult to manage up to now, such as the water level of sewer pipes and the water level overflowing on the ground, and centralizes disaster prevention information by sharing information on the cloud. The water level in the sewer pipes is detected by the sensors attached to manholes, and the water level on the ground is detected by the sensors attached to the power poles. In Tsukubamirai City, real-time observation information and water level prediction information are integrated as disaster prevention information and utilized for road closures/traffic route determination, sandbag/water stop board installation, evacuation calls, rescue/recovery determination, etc., as well as information provision to citizens as needed. In this way, efforts to achieve disaster prevention and mitigation by centrally monitoring water levels above and below the ground are the first attempts in Japan to contribute to corresponding to climate change.
Through this demonstration experiment, we contribute to the creation of a sustainable community that is responsive to issues relating to flooding and inundation. 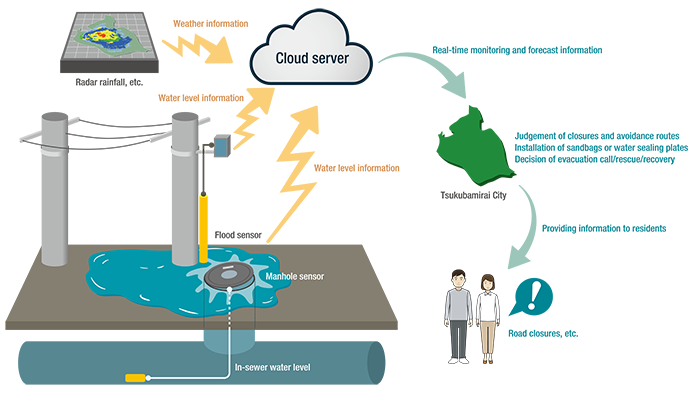