The Meiden Group Code of Conduct (COC) defines that we shall strive to ensure compliance with applicable laws and regulations of our business-related matters, other applicable laws and regulations both at home and abroad, social and ethical norms, and its underlying spirit, and we shall conduct our businesses with strong corporate ethics and good social common sense.
Under this policy, the Meiden Group aims to sincerely engage in activities to live up to the trust of customers and society. Directors, executive officers, and general managers of Meidensha and each Group company, play a central role in promoting compliance in each of their workplaces, in accordance with the Meiden Group Compliance Promotion Rules.
Besides such workplace schemes, we also have a Compliance Committee set up in place, which lays down policies concerning compliance activities, organizes compliance training, dealing with whistleblowing reports, and expresses opinions and provides solutions to problems relating to a range of compliance issues that may arise.
In order to enhance the communication and reporting system, we appointed a Compliance Manager in each workplace to serve as a link between the Compliance Committee and the workplace by reporting to the Committee issues discussed and problems found in the workplace. Thus, we are engaged in activities that promote compliance, while ensuring communication among the Meiden Group companies.
In fiscal 2019, we enhanced compliance promotion systems for domestic Group companies as a group-wide compliance initiative. Also, in order to enhance overseas compliance, we are continuing to promote the implementation of internal control systems at overseas group companies.

Meidensha has a whistleblower system for compliance. This is to prevent illegal actions and misconduct and to solve problems as early as possible.
This whistleblower system includes the Compliance Hotline dealing with a broad range of compliance issues including breaches of laws such as the Antimonopoly Act and bribery regulations, breaches of internal or external rules, and labor problems, the Harassment Consultation Hotline, which is specifically designed to deal with harassment, and the Public Whistleblower Hotline for early detection and rectification of unlawful acts, etc. Furthermore, we have also established a supplier-specific whistleblower hotline in fiscal 2018.
The Internal Hotline System is an internal measure to receive anonymous whistleblower reports from employees including retirees, through a dedicated phone line, letters, or email contacts . The Public Whistleblower System handles external communications at a law firm as well as internal communications, and may be used by employees of the Meiden Group (including retirees), temporary staff and subcontractors, and suppliers.
The Compliance Committee investigates the report that is brought to the whistleblowing contacts and, if necessary, consults with a lawyers to deal with them. We are working to increase the dependability of management of information, such as the names of whistleblowers, of and the whistleblower system as a whole, in accordance with national guidelines, to ensure that whistleblowers are not disadvantaged by using the system. In fiscal 2019, the Meiden Group received 47 reports and consultations, of which we thoroughly confirmed which cases required a response and dealt with them accordingly. The Audit Department conducts internal audits of the operation of the system.

Harassment is one of the compliance issues regarding which consultation is most frequently sought, so we established the Harassment Prevention Committee to create a system that is specifically designed to handle harassment issues, and we are working to centralize handling of confidential information and responses as well as enhance activities to promote understanding.
When a report of harassment is made, responses are required that are considerate of personal relationships, and particularly those of the reporter, so we created a system to avoid infringement of human rights by establishing a hotline that is specifically designed to deal with harassment issues and creating an environment that is conducive to talking about issues. In addition, we are conducting activities to educate employees including managers, about Anger Management as a measure against harassment. 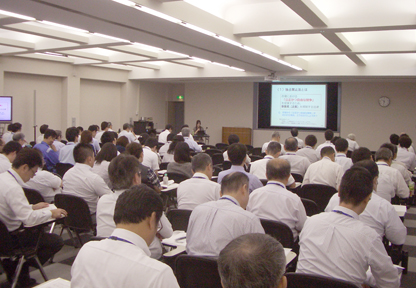 The Compliance Committee conducts compliance training at our business locations throughout Japan, in order to maintain and improve awareness of compliance and internal control systems while collecting opinions from workplaces. Compliance training aimed at employees, including Compliance Managers at each company in the Meiden Group, provides updated information and education on compliance activities, and an opportunity to exchange opinions with the Compliance Committee.
In fiscal 2019, we conducted compliance training at locations around Japan, with 1,443 participants. The Committee made reports concerning the status of compliance activities at the company as a whole, and the Legal Affairs Division gave further training using case-studies aiming at sales and manufacturing activities in compliance with the Anti-Monopoly Act, and the Subcontracting Act.
In addition, we conducted education concerning harassment and environmental laws, and we are working to increase awareness of a broad range of compliance issues.
Also, we are continuing to conduct trainings for Officers by external instructors and group-work education for heads of business units, in order to enhance internal control.
The participants of these courses sent us feedbacks about their workplace status, opinions/requests to the Committee, and many questions, so we utilize them in our activities for fiscal 2020.

The Meiden Group has the “Meiden Group Corporate Code of Conduct” in place and is working to ensure compliance with laws and other social norms. In addition, we compiled the corporate philosophy system and guidance into a booklet in three languages (Japanese, English and Chinese) in preparation for globalization.
Furthermore, we have released the Bribery Prevention Policy in three languages, as guidelines to supplement the aforementioned code of conduct, in order to observe laws and regulations relating to bribery prevention. These standards and policies can be referred to in the Group-common web portal.